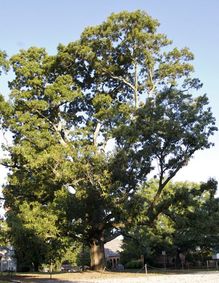 An old saying says that a church is not the bricks that make up its building, nor is it the minister or ministers that preach there on Sundays. Rather, it is the diverse people who make up the congregation. In 1947, with this thought in mind, Presbyterians began to meet under an old oak tree to worship. There was no building and no minister, only faithful believers who sought to gather together in a community of life. Today, many years later, that same tree still stands on what is now the corner of Fernwood Drive and Fairfield Avenue. What began under the tree is now Guilford Park Presbyterian Church, organized officially in 1948 as an off-shoot of the historic Buffalo Presbyterian Church.

Initially called the Fairfield-Kirkwood Chapel, the church’s first building was completed in October, 1947 and the Presbytery called the Rev. James W. McGinnis to lead the congregation. On January 13, 1948, the Presbytery affirmed the organizing petition of sixty-one people and officially chartered the church on February 15, 1948. That same day, church officers were elected; and two days later the Women of the Church (now called Presbyterian Women) was organized. In 1956, which Pastor Irving E. Birdseye led the church, the present-day sanctuary was completed. 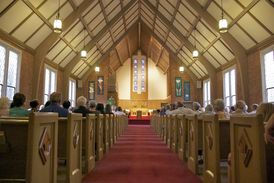 The design of Guilford Park’s sanctuary is very purposeful in meaning and handiwork. The twelve stained glass windows that surround the stone cross in the chapel illustrate the eleven faithful apostles and Paul. The stone cross is visible in both the interior and exterior wall, making it a powerful symbol to those worshiping in the church and to the world outside, so that they might be drawn to Christ.

Integrated throughout the sanctuary design are woodcarvings created by church members. These carvings can be seen in the chancel, on pews, and on doors in the sanctuary. The lectern and chancel screen carvings are particularly noteworthy. The eagle that supports the lectern was carved out of a single block of oak by church member Samuel T. Oliver. Another church member, James E. Best Jr., created delicate carvings that grace the chancel screen. Reredos behind the communion table were carved by member Ernest F. Skillman. Rev. Irvin E. Birdseye carved the sword and the vine that adorn the pulpit.

In addition to the carvings, members over the years have created other works of art for the sanctuary. Colorful banners, sewn by church members show the symbols of Advent and Easter, as well as other special times in the Christian church. Needlepoint cushions, designed by Mrs. Harold G. Robinson Jr. and crafted by church members are located on the Elder’s benches in the chancel. 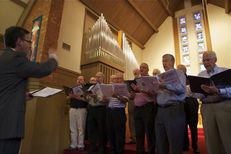 Music has always played an important part of worship at Guilford Park as well. In 1966, while Pastor Lews W. Bledsoe served our church, the Waclker pipe organ was installed in the sanctuary. This organ, crafted in Germany, is unique in that it is a tracker action instrument similar to the organs used by Bach and others before electricity was available for the operation of organ consoles. Members share their musical talents in many ways, including a children’s music program, a traditional choir, and a Men’s Chorus. In addition, Guilford Park also has a contemporary 9 a.m. worship service. This year-round early service (YES) service uses contemporary musical selections that integrate guitars, woodwinds, and other instruments into its praise music. 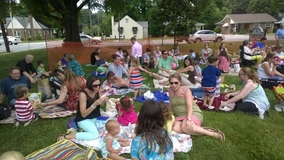 Cdontinuing the reach out into the community, the church opened its educational wing in 1960. In 1974, the building was named the Birdseye Education Building after Guilford Park’s second pastor, the Rev. Irvin E. Birdseye. Under Dr. Donald E. Lannon, growth continued at Guilford Park as the church added its present-day Fellowship Hall, parlor, and kitchen in 1973. With continued growth, the church added the position of associate pastor. In 1979, Rollin M. Steele came to Guilford Park church as our first associate pastor and served until 1983. The Rev. Joann R. Hull replaced him, and served until 1997, at which time the Rev. Margie Boyd was called. She served until 2011, and was followed in 2014 by Jo Nygard Owens who served until 2017.

After lovingly guiding the church in its growth and development, Dr. Lannon retired in 1993 and was later appointed Pastor Emeritus. In 1995, Dr. David Sutton came to Guilford Park to continue to lead the church in new directions. In December 2005, Dr. Sutton left Guilford Park, and the Rev. Virginia Wood was called in 2008. Her time with Guilford Park lasted until 2009, and in 2011 Dr. Jeffrey Paschal was called. He provided strong leadership, faithful preaching, and works for justice within our community and around the world. Dr. Paschal also wrote a monthly column in the Greensboro News & Record. His time with Guilford Park lasted until 2020.

In 1985, the church opened its highly-regarded Weekday Preschool program and it continues to offer quality early childhood education today. Mrs. Debbie Huneycutt, who retired in 2021, faithfully directed the school for more than 30 years. This program continues to serve both church families and community families under the able leadership of Mrs. Rebecca Willoughby. 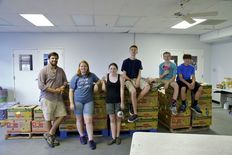 Guilford Park has always placed an importance on mission work– both within its own community of Greensboro and in communities elsewhere. In 1975, Guilford Park joined four other Greensboro Presbyterian church to establish the Presbyterian Counseling Center. The center provides personal and family life education and counseling from a Christian perspective. Members have actively participated in ministries at Habitat for Humanity, Urban Ministries, CROP Walks, and many other meaningful programs. Members have also participated in mission trips to  Nicaragua, Mexico, West Virginia, the Gulf Coast, and Washington, DC.

Within the church, a wide variety of opportunities are available for education, fellowship, and service. A variety of Sunday school programs for children, youth, and adults offer an opportunity for biblical study and fellowship and an active youth program helps our teens foster close relationships with each other and God as they journey into adulthood.

Fellowship groups include Almanah Women, Geezers breakfast, and Game Night. We have been truly blessed by a congregation that has many creative ideas and the energy to turn those ideas into reality.

Today, the tree under which Guilford Park first started remains standing, but much around it has changed. And yet, the Holy Spirit, so evident in those early days when members gathered to worship under the tree, remains in evidence in our congregation as a charter member and new members alike continue to share their gifts, grow in their faith, and reach out to others.